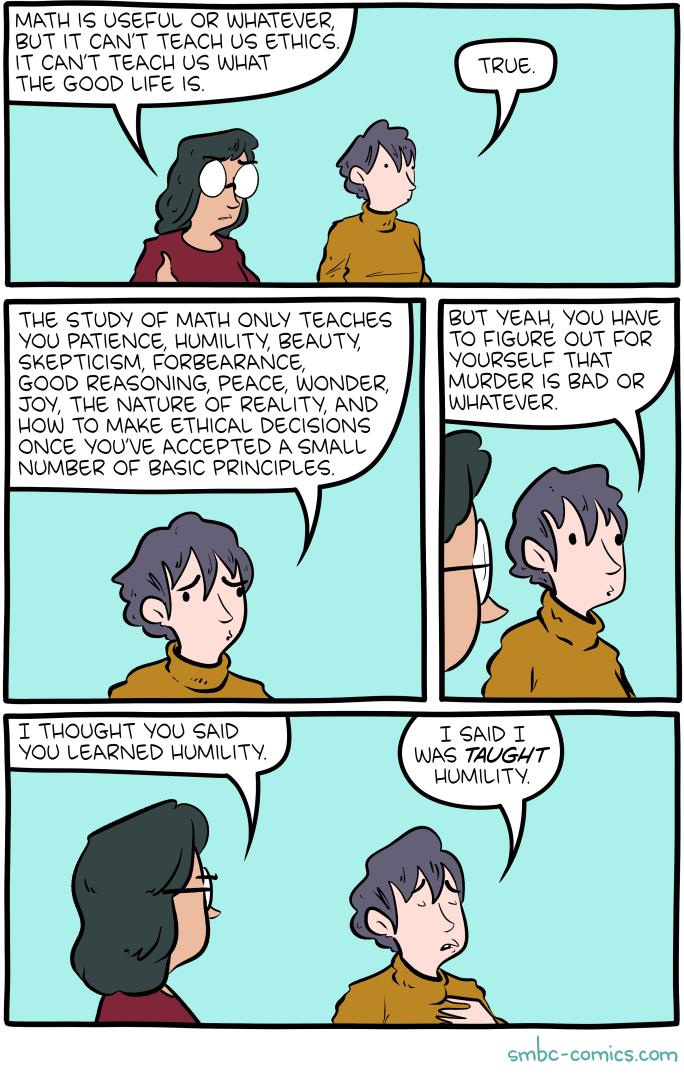 Hovertext:
Written after enjoying Francis Su's new book, Mathematics for Human Flourishing, which slightly changed my view about this type of question.

One: A bunch of you mutants who use RSS noted that it was having weird formatting issues. I've deformatted today's blog before posting. Please let me know how it works.

Two: Thanks for the lovely emails, cucurbit-fanciers. I'm sorry so many of you have had trouble growing them - consider trying gourds or cucumbers or melons, which seem less subject to pests in my experience. One reader recommends looking into tatume squash.

Three: I've gotten some requests to host these posts somewhere so people can cleanly share them. I'm looking into it. My one rule is I don't want it to be the least bit interactive, other than through emails, so a lot of the ready-made blogging sites won't work. More to come.

“A bunch of you mutants who use RSS noted that it was having weird formatting issues. I've deformatted today's blog before posting.”
Washington, DC I hate a phone call

rraszews
If you time traveled back to the '80s, teenagers would find it utterly incomprehensible that we all have phones we carry on us every minute of the day but we consider their ability to make phone calls vestigial at best and a nuisance at worse.

@NeolithicSheep: My dad and I used to play Duck Hunt together on my nintendo by @NeolithicSheep
Friday June 10th, 2022 at 8:11 AM

My dad and I used to play Duck Hunt together on my nintendo https://t.co/Kn9cv5AVvk

@deathbybadger: ANGEL: lord we would never question but are you sure this is necessaryGOD: (sprinkling more bisexuals onto a globe) it most certainly is, now hand me the box of genders, it's under the tin of poets by @deathbybadger
Friday June 10th, 2022 at 8:08 AM

ANGEL: lord we would never question but are you sure this is necessary

GOD: (sprinkling more bisexuals onto a globe) it most certainly is, now hand me the box of genders, it's under the tin of poets https://t.co/rMYEsur3SP 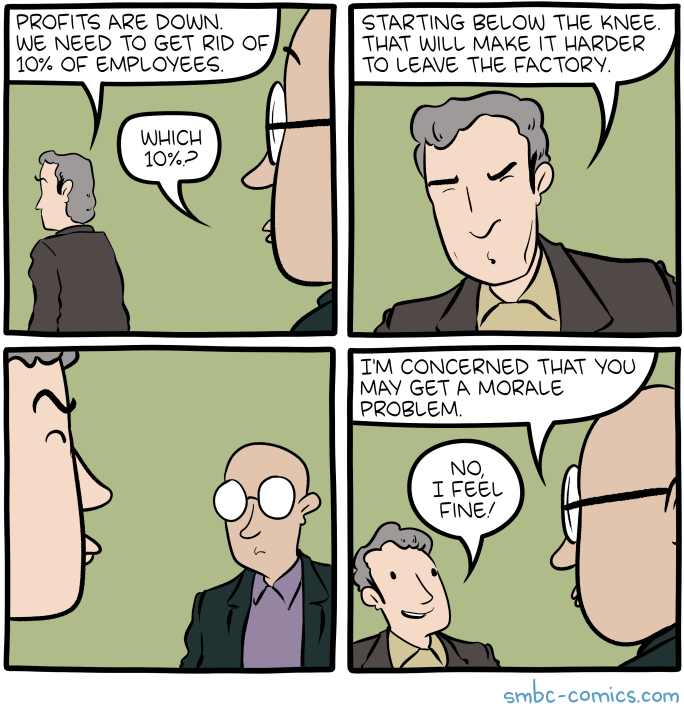 Hovertext:
The good news is you can do this to the software engineers and nobody even notices.

Here's an obscure reference: it reminds me deeply of the works of Lilias Rider Haggard, which you haven't read. However, you may know her once-quite-famous author father Henry Rider Haggard, best known for creating the character's Allan Quatermain and "She." In both cases, the parent was the more famous author but lacked a note present in the child. Both Lilias and Christopher do pastoral writing and had lives intersected by the Second World War. Lilias is obscure now, though Christopher Robin may hang on longer thanks to the eternal Disneyfication of stories about Winnie-the-Pooh. This hasn't happened with Henry Rider Haggard because his novels are mostly set in colonial Africa, and though some are less-racist-than-you'd-guess, they are very much books of their period. As I recall, they even have forms of bigotry I hadn't known existed, like deep concerns about English men marrying Dutch women, and the general treacherousness of the Portuguese!

Anyway, I'll tell you what I like about both Lilias and Christopher's work, which is that they're what HR Haggard called "small beer" books, meaning that they're not after big literary achievements. They're just talking about what it was like to be the author at a place and time. This is me slightly stereotyping, but I think the project of a small beer book is helped along by being British. Somewhere Bill Bryson wrote about how the reason he loved living in Britain was how the British could get so delighted by the trivial. It took so little to arouse joy - the weather, a nice hedge, a bowl of custard. In Christopher Milne, he writes about the tedium of managing a bookshop in the village of Dartmouth with the same level of interest and detail that he gives to his war service in Africa and Italy. I don't think this is an act - it's the genuine feelings of a very private very shy man silently and deeply moved by a quiet almost-anonymous life.

You can also see that Milne, had he wanted and had the nerve, could've been an excellent essayist. In a short book he has beautifully phrased thoughts about religion, society, nature, literature, and to my mind he is especially moving when he writes about caring for his daughter Clare who had cerebral palsy. There's a "Prayer for Owen Meanie" quality to it, in that one of Milne's repeated laments is that he had his father's good brain and his mother's ability to make things, but did not excel at either. But then you find him later in life able to use those hands to make a special wheelchair for his daughter and a spoon so she could feed herself. And the part of his mind that is sentimental and fit for writing is able to see the beauty in it.

So go read it - it's called The Enchanted Places. Also, go read anything by Lilias Haggard. None of it is in print any more but none of it costs much, and it is pure liquid charm.

Thanks to everyone who wrote to say they enjoyed the blogs. I had thought social media killed blogging, but a few of you seem to be here in the afterlife. Isn't it strange how a blog without comments is so much more intimate than social media? I think the key is that blogs are like letters, and letters are the most intimate human experience that doesn't involve touching someone's butt. Come to think of it, they may be more intimate now than in their heyday because only a few of you will even bother to read.

astranoir
reply
"the most intimate human experience that doesn't involve touching someone's butt" from the blog post part is cracking me up, but I found the whole thing worth a read

The "Today's News" text here is really worth reading.
Boulder, CO
Next Page of Stories